Who hasn’t heard about the faux pas that Apple committed when they rolled out hundreds of millions of free copies of U2’s Songs of Innocence to all their iTunes users, many of whom then had the album automatically downloaded into the music collection on their computers, iPhones, iPads, and/or iPods, whether or not they actually wanted it?

A lot of people are saying, “What’s the big deal? You got free music! If you don’t like it, take it off your device! Cry baby…” Apple and U2 probably think they’re being generous, like Oprah, giving away albums. 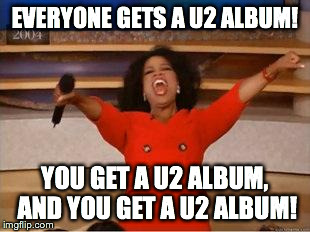 The problem is, Apple shoved the album into everyone’s archive of purchased music, from which it would download if a user authorized automatic downloads, and didn’t give people who didn’t want the album a mechanism for getting rid of it completely. People could delete the album from their devices, but Apple would just restore it from the archive. No one doubts that it was meant as a gift, they just question how it was made.

I don’t let Apple download anything automatically, so I didn’t have to remove it from any of my devices. I did, however, delete the album from my archive. Despite being a member of U2’s demographic (fat old white guys), I don’t care for their music.

Do you think people overreacted to what was meant to be a nice gesture on Apple’s part, albeit poorly handled? Or should Apple have offered it and let their customers decide whether or not they wanted it? I’d be interested in your thoughts.