My guess is you’ve heard the above advice more than once in your life, from teachers, parents, religious leaders, bosses, people who write books and magazine articles about things like this, maybe even written on a bathroom wall. If you’ve ever lived you life according to this principle, this is for you.

It’s a load of crap.

I know, because I was one of those people. Maybe an extreme practitioner of this advice. I made the mistake of taking this advice to heart. As a result, rather than doing a lot of things I would have liked doing, I held off. This is how my internal dialogue would go:

“I need to learn how to do that first. I’ve never been taught to do that. I’ll get it wrong and embarrass myself, or worse, someone dear to me. I can’t chance that. I could never live with myself if it went wrong.”

If this were the case, people would never do anything, would they? I know I didn’t.

Somewhere close to the end of my tenure at the job I held for almost twenty years, a friend of mine cornered me in the cafeteria. He told me about an opportunity he had in marketing, and how he thought I would be the perfect person for it. There wouldn’t have been any direct selling involved, either. It would have been a perfect job for me, I’m sure. So what was my answer?

“Gee, I dunno. I’ve never worked in marketing before. I’m not sure I’d be right for the position.”

Never mind that I was miserable in the job I had at that point. My job description had changed: instead of being a trainer who occasionally did consulting, I was now a consultant who occasionally did training. My manager was, to be kind, a real jerk with whom I had never gotten along. I wanted out really badly, but didn’t know how to get out. And here was a friend of mine offering me a way out of a bad situation, and I was scared to jump on it, because I wasn’t sure I could do a good job of it. Even though my friend assured me I was the perfect person for the job, I… just couldn’t do it. They needed someone who knew what he was doing in marketing, and that wasn’t me.

I made the assumption that, since I had never worked in marketing, I wouldn’t know what to do. I wouldn’t do the job “right.”

Would I have made mistakes? Sure. Everyone makes mistakes. That’s how you learn. But I let that keep me from doing something I might still be doing now if I had just taken the chance. Now that I think about it, I still would have kicked some major butt at the job, mistakes and all.

This is Independence Day weekend in the United States. Did those guys who signed the Declaration of Independence know anything at all about running a country? Darn right they didn’t. But they did it, anyway, and didn’t do a half-bad job of it. It hasn’t fallen apart yet, despite the best efforts of the politicians who run it. Did they make mistakes? Of course they did. But it didn’t stop them. It was worth doing, and they did it.

If they can do it, so can you. 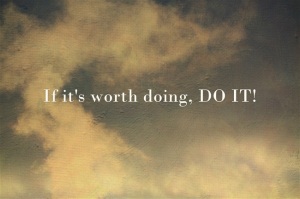 Enjoy your Independence Day, or whatever it is where you are on July 4th.