Mary wants me to tell the story of my family’s first Christmas in our new home in Northfield, Illinois, 44 years ago. Specifically, putting up the Christmas tree. 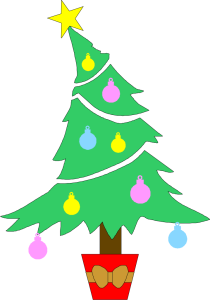 I mentioned Father Christian in one of my stories last week. He was the pastor of St. Ignatius Parish and a good friend of my mother’s, a friendship that started around the time Dad was in the hospital. He used to help with all the jobs Dad was no longer around to do and we were too young to be any more than a help. One of those jobs was setting up the Christmas tree.

When we lived in Chicago, we had an apartment with a fifteen-foot ceiling, and Mom would always insist on a tree that touched it. This meant using fishing line to hold it in place so it didn’t take a tumble after we had gotten it in place and fully decorated. When we moved to Northfield, the ceilings were much lower, so obviously we had to have a much shorter tree, around nine feet. Still touching the ceiling, just not as tall. Mom was disappointed she wouldn’t be able to put all the ornaments and strings of lights on the tree, but that was life in the suburbs.

Tex (our name for him) reasoned that, as the tree wasn’t anywhere near as tall as the ones we had in Chicago, he might not need to tie the tree up with fishing line anymore. He and Mom discussed this at some length, until finally he had talked her into doing without the fishing line, or at least trying it. If the tree looked like it would fall, he would tie it up, but he didn’t think it would.

So we bring the tree into the living room, set it in its base, and stand it up. “It looks a little crooked, Jack,” Mom said.

“Bunny, it’s fine.” (NOTE: Mom was named Genevieve, after her mother, but since she was born on Holy Saturday, the day before Easter, she had always been called Bunny, even after the nuns at St. Ignatius School had insisted she learn how to spell and use her given name.)

“It’s fine!” By now, Tex was being more emphatic, and the subject was dropped.

A couple of hours later, the tree was fully decorated, complete with lights, ornaments, and tinsel. We had dispersed around the house: Jim, Kip, and Tex watching football in the family room, Mom making dinner, Mom’s aunt Cash (a frequent visitor as well) enjoying the tree and slowly falling asleep in the semi-dark living room, me playing the guitar in my room. It wasn’t long before I heard it….

I didn’t have to ask anyone. I put down my guitar, and walked out of my room just as the front door slammed. Sure enough, the tree was on its side in the living room. I noticed that Tex was nowhere to be found: Mom explained that he had put on his coat, declared “I’m going for a walk!” and was now walking around the neighborhood in an attempt to cool down. He was gone a good half hour, as I remember.

So Jim and Kip managed to get the tree vertical again, and I was given the task of vacuuming up the broken ornaments, tinsel, and pine needles. As I pushed the ancient Hoover around, Mom came up. “I don’t know when he’ll be coming back, Johnny, so hurry up and finish getting this all cleaned up.” I started to laugh at the absurdity of the situation. “What’s so funny?” she demanded.

I started to sing, “It’s beginning to look a lot like Christmas,” pushing the vacuum back and forth in rhythm.

At that point, everyone started to laugh. We were all a little punchy, so I guess it broke the tension. We were still laughing when Tex came back. Mom caught him before he walked out again and told him the story, and he laughed, then went out and got the fishing line. It was probably a good thing we had all the extra ornaments.

A postscript: I was at work the day they put the tree up the next year. I understand, as Tex, Jim, and Kip wrestled the tree into place, “It’s Beginning To Look A Lot Like Christmas” came on the stereo. Tex said, “All right everyone: stop, listen, and laugh!”