I remember learning how to do a simple card trick when I was about ten. When I showed it to my grandfather, he said, “You’re pretty good at that prestidigitation!” I didn’t know whether it was a compliment or an insult, so I said, “what?” He told me to look it up, and I learned it means “sleight of hand,” or “legerdemain,” or as we called it, “magic.”

I don’t know if kids do magic tricks anymore, or if they’re too busy with video games and iPads to be interested in it, but it was big stuff when I was growing up. Everyone knew how to do magic tricks, even if they themselves couldn’t do them. Many of us learned our tricks from The Magic Hands on “Trick and Treat,” an interstitial. Here’s an example (unfortunately, the guy who uploaded it turned off embedding) of what the shows were like. The Magic Hands, a disembodied pair of hands, would demonstrate the trick, then make you sit through a commercial before he told you how it worked. In Chicago, we saw the show as part of “Garfield Goose and Friends” with Frazier Thomas, but ours were sponsored by Cracker Jack. This was during the time that the wonderful Jack Gilford was doing the commercials for them. This one, from 1970, won a Clio award.

We used to walk home from school at lunchtime (we lived a couple of blocks away) and watch “Bozo’s Circus” at noon on WGN. They used to advertise something called “TV Magic Cards.” Marshall Brodien, a “professional magician” from the Chicago area, designed them and sold them. Here’s the commercial, which the uploader put in the video twice.

Marshall was a semi-regular on “Bozo,” and by the mid-1970’s was a regular on the show, playing a character named Wizzo. 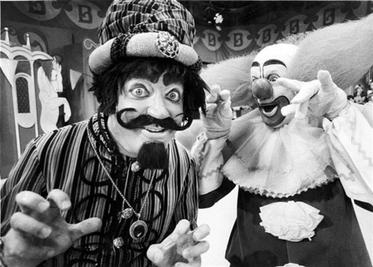 Marshall’s retired now, and sadly suffers from Alzheimer’s. His wife, Mary K. Doyle, has written a book called Navigating Alzheimer’s: 12 Truths about Caring for Your Loved One. He does have a page on Facebook (which I think Mary maintains), and seems to be doing all right, for now.

Today’s prompt, “prestidigitation,” was suggested by Pamela at Butterfly Sand. Just Jot It January is hosted by Linda Hill.