A guy I worked with once used the line “Buy ’em books, buy ’em books, all they do is chew the covers off.” I thought it was hilarious, even though I didn’t understand what he meant. I remembered it when I saw the prompt for this week was “books.”

Still not quite getting what it meant some 40 years later, I decided to look it up, and evidently there are two possible explanations.

Which brings me to the true purpose of this essay, Bill Holman, a cartoonist for the Chicago Tribune who drew the cartoon Smokey Stover. I used to read the cartoon every Sunday, and decided the guy was either crazy or on something, maybe both. But I liked it. 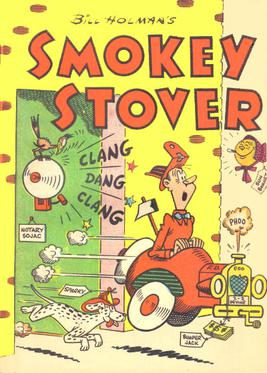 Smokey was a fireman, or in his parlance, a “foo fighter.” (Now you know where the band’s name came from.) His chief, who he referred to as “Chiefy,” was named Cash U. Nutt. The strip was loaded with puns, not necessarily related to the story of the strip; they appeared as a sort of picture-within-the-picture, in part of the comic frame that would otherwise be unoccupied. (An example: a picture might be labeled “Whipped Cream” and depict a cream pitcher being lashed with a cat-o’-nine-tails.) Or a tag might be attached to an item in the picture, such as a dog’s bone bearing the tag “Ca c’est bone.”

In addition to “foo,” Holman always managed to squeeze the phrase “Notary Sojac” into the comic somewhere, on a street sign, a wall, or even as a sheet of paper if he couldn’t find anywhere else to put it. He always explained that it was an approximation of “Nollaig Shona Dhuit,” the Gaelic phrase meaning “Merry Christmas.” For a time, he would also include the phrase “1506 nix nix,” no doubt an inside joke.

The cartoon, many examples of which can be seen on the website, was so unique that, when Holman retired in 1973 after having drawn it for roughly forty years, the strip merely ended. No one took it over, because no one could. It was unique to Holman and his loony sense of humor. It hasn’t totally died, though: the word “foo,” generally in conjunction with the word “bar,” shows up all the time in computer science textbooks, generally as variables, e.g. foo = 1; bar = 2; That, in turn, refers to the military term FUBAR, which politely translates as “badly screwed up.”

To bring this full circle, I checked Amazon for books of Smokey Stover comics, and it appears that most of them are antiques. Seems a shame to let humor like his die out…