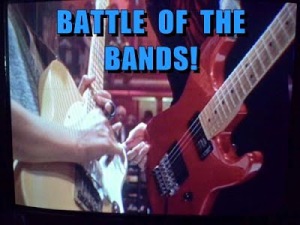 This was a lot closer, and the outcome was different, than I thought:

A lot of you were unhappy with my choice of songs, which is fair enough. Arlee seemed almost relieved that I did it, because that way he didn’t have to; two of you left comments telling me that you weren’t going to vote; Birgit said she wanted to see Big Jim McBob and Billy Sol Hurok from SCTV’s “Farm Film Report” blow Debby Boone up real good; and several of you indicated that you’d feel differently if the song hadn’t been played into an EBS Special. Most of you picked up on the difference between the two songs (Ms. Cisyk sang it as a love song, Ms. Boone as a Christian praise song), which I think was the point of the whole exercise.

Anyway, congratulations to the late Ms. Cisyk, and a hearty “well done!” to Ms. Boone.

I already have the next battle drawn up and in the chute, ready to be released next Thursday morning, so be sure and tune in then!

9 thoughts on “BATTLE OF THE BANDS: “You Light Up My Life” Results”