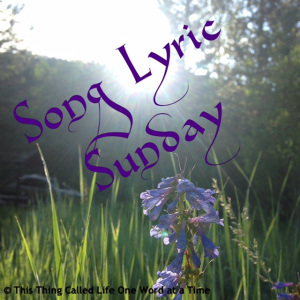 Sometimes, this job can be downright frustrating. When Helen gave us the prompt for today, “take,” the very first song that jumped into my mind was “Take The ‘A’ Train,” the jazz standard that was written by Billy Strayhorn. Who wrote the lyrics are somewhat of a mystery. Wikipedia says this about them:

Although Strayhorn said he wrote lyrics for it, the recorded first lyrics were composed by, or for, the Delta Rhythm Boys. The lyrics used by the Ellington band were added by Joya Sherrill, who was 20 at the time (1944). She made up the words at her home in Detroit, while the song played on the radio. Her father, a noted Detroit Black activist, set up a meeting with Ellington. Owing to Joya’s remarkable poise and singing ability and her unique take on the song, Ellington hired her as a vocalist and adopted her lyrics.

However, other sources credit Otha “Lee” Gaines of the Delta Rhythm Boys wrote the lyrics, and they were the first group to record them. I’m inclined to go with that. Here’s the video of the Delta Rhythm Boys singing it. That’s Mr. Gaines singing lead, and from the comments I believe that Dorothy Dandridge, wearing a polka-dot dress, is the woman standing on the left inside the train door at :50.

Now, here is the frustrating part: I’ve been all over the Internet looking for the full list of lyrics that they use in the video, including MetroLyrics, LyricsFreak, SongLyrics.com, AZLyrics, Genius, AllTheLyrics, SongFacts, and LyricsMode, and couldn’t find them. I even spent over an hour trying to transcribe them myself, and finally gave up. Here are the only lyrics I’ve been able to find.

Hurry, get on, now, it’s coming
Listen to those rails a-thrumming (All Aboard!)

Anyway, it’s a great song, and the video is nothing short of amazing. Listen and enjoy!