Naila-Moon left one in my wheelhouse, to use a baseball expression, when she declared this week’s music to be all about “The British Invasion”! From February through July of 2015, I did a series on The British Invasion for Two for Tuesday. Here was the badge, in fact… 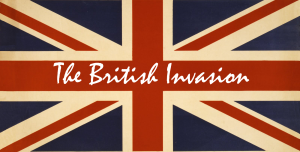 The full list of all of my Two for Tuesdays has links to all the posts I did for it. Search for “British Invasion” when you get there. As is often the case, some of the videos are gone, but enough are still there. I purposely avoided The Beatles, not because I didn’t want to feature them (I did), but because the lawyers for something called WMG made everyone take their videos down under threat of a lawsuit. Fortunately, their music is being posted on Vevo (apparently with the approval of WMG), so we can share some of it here.

Free As A Bird – The Beatles This song kicked off Anthology 1. Apparently Yoko found a tape John made before he died, and gave it to Paul, George, and Ringo to see what they could do with it. They listened and turned it into a masterpiece. You want to know how they might have sounded if they stayed together? Here it is. As far as I know, it’s the only song attributed to all four Beatles.

19th Nervous Breakdown – The Rolling Stones The Beatles were always seen as the clean and innocent group, whereas The Rolling Stones, not so much. There was always this “Beatles vs. Stones” rivalry that the teen fan mags tried to create, but they were actually friends and it was Lennon & McCartney that inspired Keith Richards and Mick Jagger to write their own songs, such as this one.

Because – The Dave Clark 5 Another fan mag rivalry was between The Beatles and The Dave Clark 5, mostly because “Glad All Over” knocked “I Want To Hold Your Hand” out of the top spot on the British charts, but again, they sounded different: where The Beatles typified the “Liverpool” sound, the DC5 typified the “Tottenham” sound. (Thanks to Dan for pointing out the mistake in the link.)

A Summer Song – Chad & Jeremy Chad Stuart and Jeremy Clyde might be best remembered as the singing duo whose voices were stolen by Catwoman (Julie Newmar) in an episode of Batman (it was just on a couple of weeks ago), but they had a number of hits in the Sixties and are one of my favorite singing duos.

There’s a Kind of Hush – Herman’s Hermits The adorable Peter Noone, called “Herman” because a pub owner thought he looked like Sherman from “Peabody’s Improbable History,” and his group had a string of hits in the Sixties. I got this record for my eleventh birthday from a friend of mine, and it was one of my favorites. (Hard to believe it was fifty years ago…)

And that’s this week’s Monday’s Music Moves Me.

Monday’s Music Moves Me is sponsored by X-Mas Dolly, Callie, Cathy, and Stacy, so be sure and visit them, where you can also find the Linky for the other participants.

The artists and bands that made up the British Invasion were heavily influenced by blues artists who, unable to find an audience in the United States, found new fame in the UK and on the European continent. Many of the bands started out primarily covering material by Muddy Waters, Howlin’ Wolf, Willie Dixon, Otis Rush, Jimmy Reed, and, though not a blues artist per se, Chuck Berry. The Yardbirds, Them, The Animals, and later acts such as the Peter Green-era Fleetwood Mac, John Mayall’s Bluesbreakers, and Alexis Korner’s Blues Incorporated, owe much of their early success to playing the blues.

Possibly the most popular of the bands that started out playing the blues was The Rolling Stones. They took their name from a Muddy Waters song, “Rolling Stone,” a song that goes all the way back to the Delta and Robert Johnson. Supposedly, Keith Richards met Mick Jagger, a friend he had lost contact with, at a bus stop in the early 1960’s, saw Jagger was carrying a Chuck Berry album under his arm, and recognized a kindred soul. The original lineup consisted of Jagger on vocals and harmonica, Richards on rhythm guitar, Brian Jones on lead guitar, harmonica, and other instruments (e.g. marimba on “Under My Thumb,” sitar on “Paint It, Black”), Bill Wyman on bass, Charlie Watts on drums, and Ian Stewart on keyboards (Stewart would leave the band in 1963, but would continue with them on and off until he died in 1985). Jones left the band in 1969 and died a month later, and was replaced by Mick Taylor, who was then replaced by Ronnie Wood in 1975. Wyman retired in 1993, and the band has carried on with Jagger, Richards, Wood, and Watts to this day, over 50 years later.

James Altucher, one of my favorite bloggers, wrote a post recently that examined the success of the band and how they’ve managed to stay together all these years, especially when they don’t seem to like each other very much. It’s an interesting read, and I hope you zip over there and read it sometime. The short version is: they love the music, they’ve worked hard together to build the band and its following, and they never say no to work.

The Stones have recorded so much music in those 50 years, it’s hard to pick just two songs. They really hit their stride in the 1970’s with songs like “Honky Tonk Women,” “Brown Sugar,” and “Tumblin’ Dice,” but when we restrict ourselves to the 1960’s, the job… well, just gets harder. So I’m, going to pick a couple of my favorites. First is “Mother’s Little Helper,” released in June 1966. It reached #8 on the Hot 100 and #4 on the Cash Box survey.

The Stones recorded much of the music for their second EP at the studios of Chess Records, the Chicago-based label synonymous with blues records. One of the songs on that EP was an instrumental, “2120 South Michigan Avenue,” also the name of an unreleased LP (which you can hear on YouTube, as always). The address is the address of Chess Studios. There were several versions of the song recorded; this is the long version of the original tune. Brian Jones plays harmonica, Ian Stewart plays organ, Jagger plays tambourine, and Richards, Wyman, and Watts contribute their musical abilities.

Sunday was Mick Jagger’s 72nd birthday. I can’t think of a better way to celebrate.

From Andover, Hampshire, UK, The Troggs (shortened from The Troglodytes) were Reg Presley (vocals), Chris Britton (guitar), Pete Staples (bass), and Ronnie Bond (drums). They had a couple of US hits between 1966 and 1969. Their biggest hit in the US was “Wild Thing”; It reached #1 in both the US and the UK in early 1966.

By 1969, the band had lost its appeal as a Top 40 band, and disbanded briefly as Bond, Presley and Britton all recorded solo projects. They reformed later that year, with Tony Murray replacing Staples on bass. They released a cover of “Good Vibrations” in 1974 and a reggae version of “Wild Thing,” both of which failed to chart.

In 1991, The Troggs and Athens, Georgia’s R. E. M. recorded Andover Athens, an eleven-song collaboration released in 1992. Bond died in 1992, and Presley retired in January 2012 due to lung cancer; he died in February 2013. Britton, Pete Lucas (bass), Dave Maggs (drums), and Chris Allen, who replaced Presley on vocals, have continued to tour. Their website has all the information on future performances as well as the current lineup and a full discography. It lists Queen’s Brian May (who celebrated his birthday Sunday) as an honorary member, as Dr. Brian May, CBE.

Donovan Leitch, known better by just his first name, started out sounding like Bob Dylan and Woodie Guthrie, but ultimately mixed his folk sound with psychedelic elements and harder rock, and became popular through songs such as “Sunshine Superman,” “Mellow Yellow,” and “The Hurdy-Gurdy Man.” He was also an influence on many other British Invasion acts, not the least of which being The Beatles. He’s still quite active, celebrating his 50th anniversary with a retrospective album, although he dropped out of the spotlight in the late 1970’s with the advent of punk rock. His official website is here, and you can find him on Facebook and Twitter.

Another person he influenced is Al Kooper, formerly of The Blues Project and Blood, Sweat, and Tears. The two songs I’m featuring today were both recorded by Al doing one project or another. The first is “Season of the Witch,” featured on Al’s Supersession album with Michael Bloomfield and Stephen Stills. Stills played guitar on the track (and used a wah-wah pedal throughout). Donovan’s version features Jimmy Page on guitar and John Paul Jones on keyboards. It was released in September 1966 on the album Sunshine Superman.

The second song is “Catch the Wind,” released in the UK in March 1965 and in the US a couple of months later. It reached #4 in the UK and #23 in the US, and was recorded by The Blues Project on their 1966 album, Live At The Cafe Au Go Go. It was Donovan’s first release and was later featured on his first album, What’s Bin Did And What’s Bin Hid.

Another Merseybeat band, The Searchers took their name from the John Wayne movie of the same name. They were originally a skiffle group founded by John McNally and Mike Pender in 1959, and had most of their success with covers of other bands’ tunes, including the two we feature today.

The first song is a remake of Jackie DeShannon’s “Needles and Pins.” It went to #1 in the UK and #13 in the US in 1964 and was on their album, Meet the Searchers.

The second song was their first hit in the UK, “Sweets for my Sweet.” A remake of the Drifters’ 1961 song, it reached #1 in the UK but didn’t chart in the US.

They also had hits with “Sugar and Spice,” written by producer Tony Hatch (later covered by Chicago’s The Cryan Shames), and a cover of the Clovers’ “Love Potion No. 9.” In 1985 Mike Pender left the band after a farewell tour, and eventually formed “Mike Pender’s Searchers.” Both bands are currently active. Each band has a website, the original band here and the Mike Pender version here.