I have a Pinterest board called “Funny!” where I post things that make me laugh. Whenever I feel a little down, I go out there to look and laugh. Not everything is appropriate for a family blog like this (the funnier it is, the less appropriate it is for here), so follow the link if you want to see what a strange person I am. Here are a couple of the ones I feel comfortable sharing here.

The English language might be one of the hardest on Earth to master, and it would appear that Asians have the most trouble translating things that make perfect idiomatic sense in their native language into it. Take this, for example, a sign found in a hotel bathroom in Thailand. This is from Engrish.com, where a lot of these are collected. 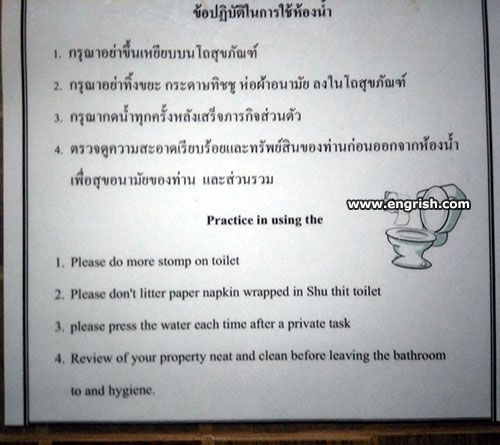 Lamebook takes strange and funny things from Facebook and Twitter. This was just posted the other day. For those who don’t know, Lawrence is where the University of Kansas is located. My nephew Bryan is a proud graduate, not necessarily because of this.

There’s plenty more on the board!

Jim’s assignment for this week, “laugh,” came with a number of suggestions, and unfortunately all of the songs I could think of were on his list. Wanting to be unique, this left me with two choices, one of which was the novelty record “They’re Coming To Take Me Away, Ha-Haaaa!” and the other was The Guess Who hit from 1969, “Laughing.” Not wanting to inadvertently offend someone, I opted for the latter, happy that as of 10:53 AM Eastern Time no one had chosen it. This was their first hit from 1969’s Canned Wheat album, topping the Canadian chart and peaking at #10 on the Hot 100.

This week’s prompt: The last thing that made you laugh.

Mary and I were watching Frasier last evening (it’s Tuesday, so we’re talking about Monday night) and one of our favorite episides came on: “Look Before You Leap,” a show from the third season that aired originally on February 27, 1996. (Thank you, IMDb.) The show opens on February 29, leap year day, and Frasier tells everyone they should take a leap of faith that day.

Naturally, it blows up in everyone’s face. He encouraged his father, Martin, to fly somewhere to celebrate his friend’s sixteenth birthday (the friend was born on leap year day), and the plane develops mechanical failure. He encourages Daphne, Martin’s health-care worker, to change her hairstyle, which she’s been talking about doing, and the result was a disaster and she was in tears. He talks Roz, his producer, into making an announcement on the radio to try and get in touch with a guy she met on the bus; when the guy arrives at the studio with flowers, he tells Roz he’s married, and she nearly beats the man to death with the flowers. For his part, Frasier, who has been asked to make an appearance on public TV and sing “Buttons And Bows” for a pledge drive, announces to all of Seattle that he will instead be singing an aria from Verdi’s Rigoletto. And, well… watch the video….