Remember when having a million dollars was a big thing?

(Yes, I know, not everyone lives in the United States. This is just an example.)

But that’s not important for our purposes. When someone is very, very wealthy, and you don’t know how much money they have, you make up a number. Like a zillion. It’s not an actual number that you can express in 10x format, but everyone understands it’s a lot. In other words, a zillionaire is someone with a zillion dollars.

What did you call your big numbers when you were younger?

And that’s it! My last entry in this year’s Blogging from A to Z April Challenge! Thanks for reading and commenting. What did you think of this theme?

The same thing happens when languages collide: there’s some transfer of words, phrases, and expressions between the two languages. In the case of Yinglish, this would be Yiddish speakers with the English language and vice versa. Lots of words and expressions have crossed over from Yiddish into English, such as bagel, shlemiel, oy gevalt, mazel tov, and yenta. Expressions like, “what am I, a doctor?”, “on you, it looks good,” and “all right, already!” maintain the Yiddish word order, but use the English words. And some words have crossed over from English and become part of the Yiddish language. Leo Rosten, who wrote the book The Joys of Yinglish, calls those words Ameridish, a portmanteau of American and Yiddish.

English is a mutt of a language anyway, based in Anglo-Saxon and borrowing words from Latin, Greek, Arabic, Gaelic, and practically all the other languages on earth. This should come as no surprise. There are those who believe that languages should be pure and exhibit very little influence of other languages. I’m not sure that’s possible, or desirable. What do you think?

The letter X, let’s face it, is, pardon my French, an enormous pain in the ass. Very few words in English start with it, and when they do, it’s pronounced like Z, as in xanthan gum and xylophone. Why not just spell them zanthan gum and zylophone and be done with it? Speaking of xylophones, here are Reg Kehoe and his Marimba Queens.

I love that video, especially the bass player, Frank DeNunzio, Sr. He really gets into it, doesn’t he?

Anyway, X is also the Roman numeral for ten, so here are ten more portmanteaux, or portmanteaus, if you prefer.

This was a little longer than most entries, but I wanted to show how portmanteaus are used all through the English language. There are portmanteaus in other languages as well. I’ve referred to this list on Wikipedia for most of the portmanteaus I’ve used here, and there are many other lists on the World Wide Web. They’re a lot of fun, and I hope you’ll take some time to look into them in more detail.

By now, anyone who works for, or used to work for, a high-tech or an international company has taken part in a webinar. They’re great, because no one has to travel. Instead of getting on a plane and flying to the meeting location, you sign in to a website like Webex or GoToMeeting at a specific time and enter a key they give you, and at the appointed time, or whenever you reach a quorum, the seminar begins. The leader can speak and share things from their computer screen, from PowerPoint, and everyone signed in to the webinar can listen watch. If someone has a question, they can click a button on their screen which pops up a place for them to type their question, and when the leader sees someone has a question they can read it and answer it. The same technology can be used to conduct other types of meetings, and often is, again if people are geographically dispersed. You can then archive the meeting, so people who can’t be there at the time can access it when it’s convenient and hear and see what went on.

The hardest thing about webinars and web meetings is coördinating people’s times. With people all over the world, a time that might be good for Asia might not be good for North America, and having to remember how many hours ahead or behind everyone is can be a pain. We ran into this with the Twitter chats we had for the Challenge, especially when the US went on Daylight Saving Time. A good website to use is TimeAndDate.com, which uses world time and computes local time based on the time zone and whether or not they’re on summer time.

Have you participated in any webinars or web meetings?

I did the original V entry last month, but forgot to tell WordPress that I wanted to post it today instead of right away, and it got out on me. I decided to come up with another word for V, and it’s a good one.

Swiss engineer George de Mestral took his dog for a walk in the woods one day in 1941, and ended up having to pick burrs off his pant legs and his dog. That gave him an idea for a fastener that would work the same way. In 1948, he made two strips, one with hundreds of tiny hooks and the other with hundreds of tiny loops, so that when pressed together they would stick to each other. 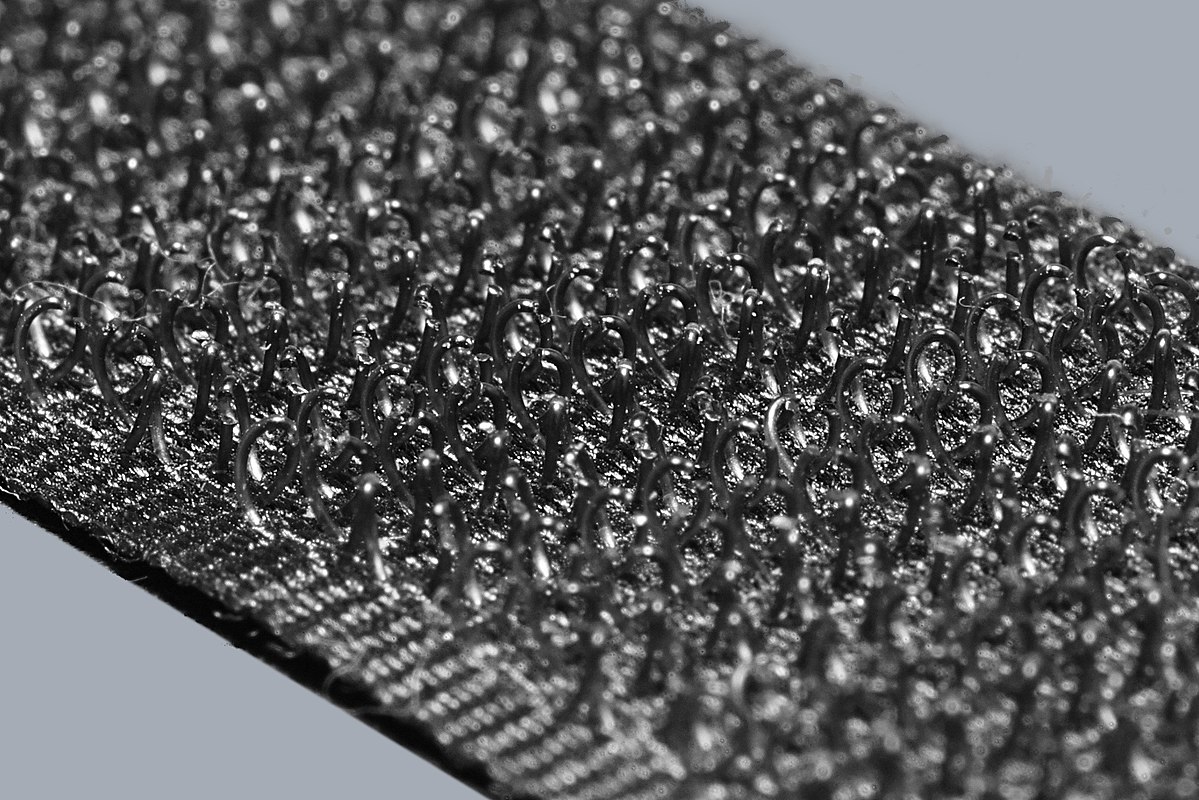 He named his invention Velcro, from the words velours crochet, or “velvet hook” in English, and it was patented in 1961. The Velcro Corporation, based in Curaçao, owns the name and the patent. They state that Velcro is a company, not a product, to keep the word from being used as a generic term for “hook and loop fastener.”

Velcro makes my life easier. Because my right hand was affected by the stroke, I can’t use both hands to tie my shoes, so my shoes have straps with Velcro strips. All I need to do is press them together, and I’m good to go. I also have a pocket on my laptop bag that’s held shut with Velcro.

What part does Velcro play in your life?